How to make an EP in just 4 years…

To those of you interested enough to read this, we’d like to say thank you for taking the time and for your interest in our music. Jenna and I, along with Jason and Peter, sincerely appreciate all of you. 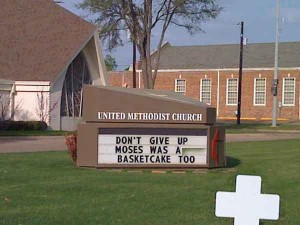 This album rose like a slow-motion pigeon from the flames of some of the best and worst times in our lives. Jenna and I were both in struggling relationships, separated by miles of ocean and completely in love during the composition of these little songs. They were written more for our own mental health than for public consumption, which makes them a little more personal for us. We have a lot of our hearts bound up in them, which will be a small part of why it took us a little over four years to put them out. It isn’t often, as an artist, you get to record songs to be released to the public. This means that when you do, it adds pressure or personal expectations that can turn the songs from the simple little things that we enjoy playing around the house, to things that people will actually listen to, hopefully more than once. So as an artist, you throw them out there and hope they connect with a few people, but inside you’re actually a little nervous about them and the whole “What if people don’t like them?” anxiety can start to creep in.

Jenna is from Scotland, and I’m from Texas, and when we fell in love, we obviously couldn’t hang out together very often. At all. Ever…what with oceans being these great, vast, expansive things and all. We spent a lot of time on the phone, on Skype and writing emails to each other. This kind of absence creates abundant food for songs. At the same time, we were also dealing with legal loopholes and had immigration laws and processes adding to our frustration. This is also good inspiration for songwriting. It was life with lots of love but few hugs. There was a lot of red tape to be tangled in while the goal of being together was in the hands of government. It made for a vexatious two and a half years. Basketcake was the typo that became our inside joke word used as a descriptor for our emotional selves dealing with all things mentally befuddling and our general pissed-offery. We were BASKETCAKES.

Now, with all of that exquisite misery, we were writing a lot of music. Fortunately, the art of composition gave us something less frustrating to focus on, something we could enjoy together while being apart, or maybe something we had somehow managed to make together while living apart. 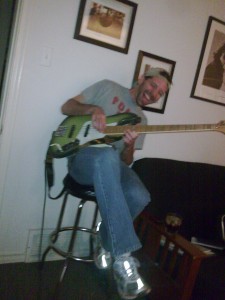 It was six years ago that Jenna and I were actually able to start our lives together. Important things that had seemed preposterous a year before—being in the same country, living together, working together and marrying—finally became reality. I had taken a long break from performing while we were getting visas and marriage licenses and now that Jenna was here, in the country, the next obvious step was to start a band. Our really good friends, Peter (Middlemarch, Millicent Friendly, Jason Bayles and the Charmers) and Jason (Deep Graffiti, LITG, Superseed, OSLP, Stara Zagora), agreed to spend a night or two a week at our house, helping arrange and rehearse these songs with us. They added immense humor and fun to our music nights and we all enjoyed adult beverages and good conversations about life and music, and sometimes balderdash. Jason and Peter are, simply put, funny and talented people, which made playing music with them all the better.

Jenna and I had played a couple of coffee shop shows, and now that we were in a proper rock quartet, we started thinking that we might need a band name. Basketcake seemed the right fit for our lyrical focus. We also planned the first of two recording sessions to complete a full-length album. The first session was to record eight songs, and we would finish tracking the rest of the album at a later date, recording another six or so songs once they were written. We loaded our instruments and most of our recording equipment into a little PT Cruiser and travelled to Waco, where Planet 100 Studios and our good friend Sia Ahmadzadeh (The Crossing, LITG, Noah and the Aliens, OSLP) agreed to help us by setting up microphones, moving faders, pushing buttons, offering arrangement advice and making us feel completely welcome in his home. Sia has a great living room with fantastic acoustics and a window with a picturesque view of Lake Waco from the top of a hill. He used to host some of the Outer Space Love Project (OSLP) sessions, so Jason and I were already completely at home there. It’s a wonderful and familiar place to create and hang out, and Sia is a great engineer, has a fantastic ear and is also a blast to hang out with. When the weekend was over, one of these original eight songs ended up not being mediocre enough to make the cut and was ceremoniously discarded, like the shrink wrap from a newly bought cd, leaving the seven songs* that make up Little Souvenir. 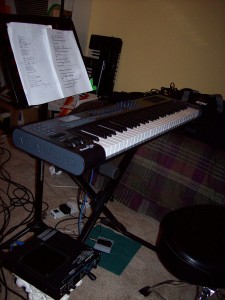 Soon after recording the bed tracks at Sia’s, our music lives became a lot more complicated. Jenna was now expecting our first baby, which was really exciting. The band continued to practice and played the Dallas adaptation of the IPO (International Pop Overthrow). It felt fantastic to finally perform these songs for people, and it would end up being our only live performance as a quartet, as of yet.

We had completed tracking the first group of songs when our first little boy was born and rehearsals with the full band ceased, as did further work on the cd. Jenna and I concentrated on raising a small human, and that apparently takes a lot of concentration! The concept of rehearsing and recording more songs to complete the album soon morphed into the realization that these seven tracks* would likely be all we would have for a few years.

Every now and again, I would get restless and work on mixing these songs in the hopes of one day finishing. It had now been over a year and a half since they had been recorded and it seemed like a letdown that they were still unfinished. I’ve produced and engineered quite a few albums in my home studio over the years, but I usually farm the mixing and mastering out to someone who can make it sound killer and be finished within a few days. Seeing as we didn’t have a deadline and the band was no longer performing (and for monetary reasons), I had decided to take on the mixing and mastering myself. 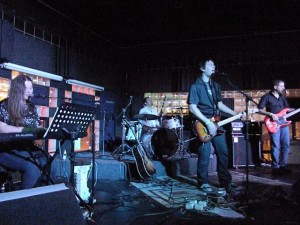 It took me a few months of tweaking, panning, compressing, EQing, reading more about mixing techniques and re-EQing to finally feel happy about how the songs were sounding. I was done, finished, satisfied and then… Jason listened to the mixes on his father’s home stereo with floor standing speakers and kindly let me know that they sounded bassy/muddy. I got frustrated (Basketcake tendencies) and shelved the entire project. I was disheartened. I’m normally not so indecisive when it comes to my mixes, but since these were our songs, I was having a hard time releasing them for public consumption when the songs sounded like you were listening to them through soup on big home stereos. I knew I wouldn’t be able to get them to sound exactly the way they do in my head, but sometimes that’s a hard thing to concede. Little did I know that by shelving them I was dooming them to another year of neglect. Basically, I had to start the mixes over again because the EQ changes I made to “unmud” them threw everything out of whack. It wasn’t really back to square one, more like back to square two and a half or square three, but it still felt like a punch in the stomach. I already knew I didn’t enjoy the mixing process, but now I was discovering that I absolutely hated mixing my own stupid songs. Then our second son was born, and just like when our first child was born, it was all happy and beautiful times again, and also reaffirmed that babies are a complete time suck! 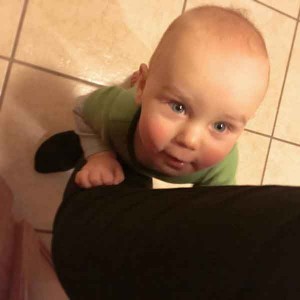 Smoking a brisket takes anywhere from 10-18 hours, depending on the size of the brisket and the temp of your pit. (Check – Texas “man card” successfully played). My brother, Bruce, once said something to me that I’ll never forget. “Nobody can ask a man to smoke a brisket, except his wife”. I think, for most married men, there’s something that happens when your wife, your biggest fan, confidante and partner in crime, asks you to do something for her. It has more weight to it, more urgency and also a greater feeling of accomplishment when it’s completed. So 4 months ago, when Jenna said to me, “It would be nice if you could finish those songs so we can play them for people.” I hunkered down again and began mixing again… in earnest… AGAIN. I was surprised that it proved so cathartic to delve back into these tracks after not hearing them for eighteen months. It brought back memories of Skyping with Jenna while we were miles and miles apart, of laughing at practice with the band, of the time spent at Sia’s place recording, of performing and having Peter and Jason over to our house to record vocals or claps. Playing in a music group generates a camaraderie that most people don’t get to experience. Jenna and I really do miss it. Hopefully, we can do something like that again after we’ve managed to raise these two small humans beyond the toddler stages. In the meantime, we hope that the few of you who are reading this enjoy these songs, songs that took us entirely too long to finally make available to you. We know they’re just seven little songs,* but they’re dear to us, and we love them, and hope you will, too.

*Little Souvenir comprises eight songs and not seven. Jenna and I wrote “Lady, Lady” for Jenna’s brother and his new wife as a wedding gift, so we consider it a bonus track, as it was not one of the original songs that were tracked at Sia’s house.